How we helped Pixers to increase revenue by 516% along with ROAS growth by 39%?

Want to increase sales in your e-commerce company and simultaneously make it more profitable? See how, in a campaign conducted in 14 markets, we increased conversion value by 516% and ROAS by 39%, while the number of website users grew – as much as 20 times. Read the Pixers growth case study.

is a marketplace with over 900,000 designs created by artists from around the world. Thanks to these patterns, you can change the look of any interior quickly and at a low cost. At Pixers, you can personalize design or photo on any material in many ways, depending only on the needs and preferences of the customer.

We started working with Pixers at the end of 2019 with an image campaign for Black Friday and Christmas in 8 countries: the Czech Republic, Germany, Spain, France, Italy, the Netherlands, Poland and Sweden. Following the Pixers request to use channels with great visual potential, in which the company was less active, we launched a campaign in social media: on Facebook, Instagram and Pinterest.

During the image campaign, we reached 1.5 million recipients who saw graphics and animations dynamically adapted to promotions changing in the marketplace. As part of the campaign, we got over 3 million total views.

At the beginning of 2020, we got another task: reach people who visited the marketplace and persuade them to make the purchase. We used remarketing and generating sales campaigns on the Pixers website.

1. Step: Feed with 368 thousand products for the remarketing campaign and SPAG

To carry out remarketing on Facebook and Instagram and the Google campaign, we have prepared product catalogues. Thanks to them, it was possible to use dynamic ads, automatically promoting the offered assortment among people who signalled their interest on the Pixers site. We also created a product feed, which had over 368 thousand items, and we faced a real challenge: to create a product campaign structure in the SPAG model and run it effectively, based on the product structure in the marketplace. 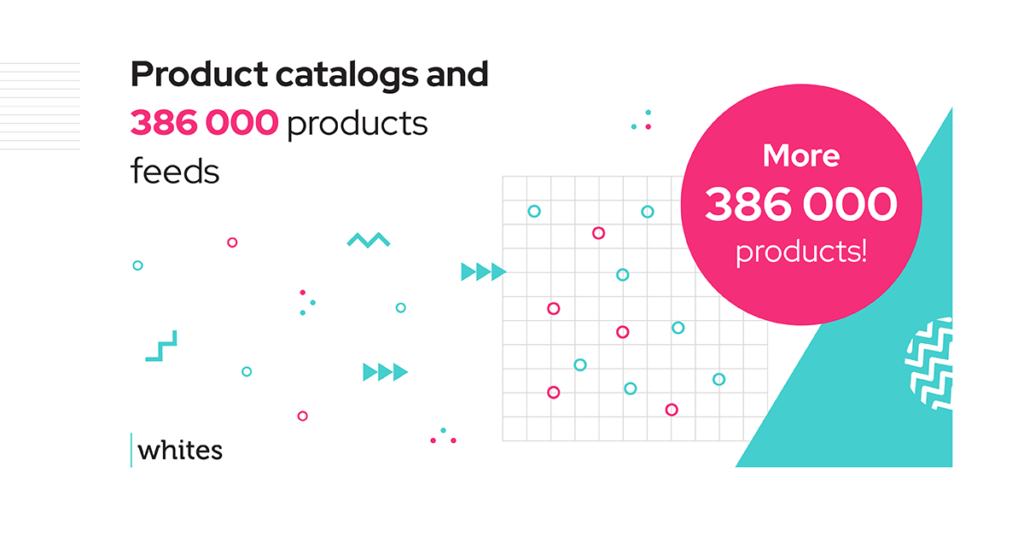 The strategic markets for Pixers were Germany, Sweden, Italy, the Netherlands, France and Poland.  The excellent results of the campaign encouraged Pixers to entrust us with creating and running the Google campaign. We started with Google Ads, specifically a product campaign in the search network, commonly known as the PLA campaign.

We usually use the SPAG (Single Product Ad Group) method for that campaign, where we have a single product within one group of ads. SPAG allows us to optimize rates and get accurate information about the phrases for a particular product and then expand the campaign and support for SEO activities. However, with 900,000 designs and their combinations and over 368,000 products in the product feed, it is almost impossible to set up a campaign in this method manually.

We did not want to give up a SPAG method, so we developed our own Google Ads script. It processed 368 298 products and built a ready-made campaign structure with division into individual categories and parameters, determined by specialists. Examples are below. 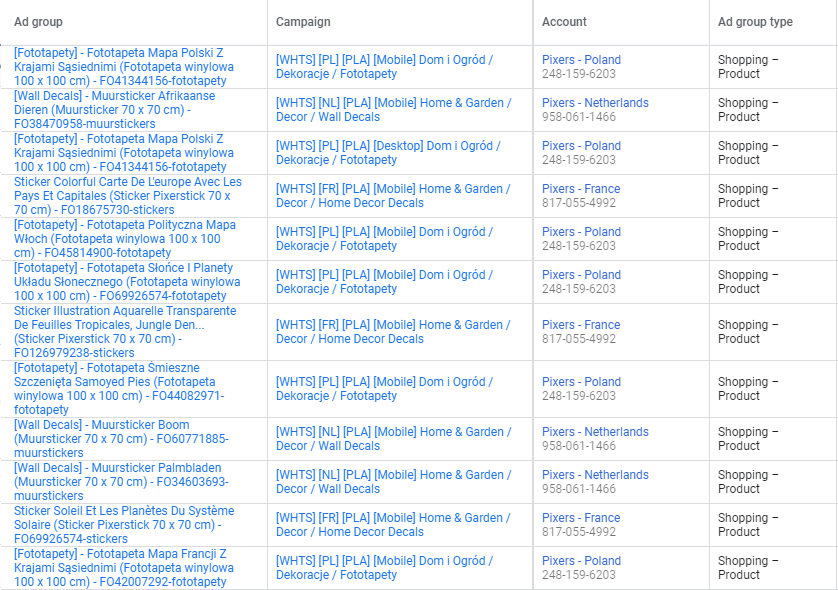 By using the script, besides setting up the campaign, we could also eliminate combinations that did not correspond to the actual Pixers’ offer, but generated costs without giving a chance to convert. As a result, we significantly increased ROAS from advertising expenses.

3. Step: Expansion into new markets and the “Multilanguage” campaign

On Facebook, we were tirelessly optimizing our campaigns. Their structure grew; we added more countries to which we targeted our ads: Spain, USA, Croatia, Italy, Belgium, UK, Canada, Portugal, Switzerland and Finland.

We grouped the underperforming markets and applied a campaign using the Multilanguage catalogue, which automatically displayed correct assortment and price information, appropriate for the language or country of the recipient. Thanks to this, we were able to advertise the artists’ designs offered by Pixers on an international scale, without creating separate catalogues for individual countries and languages. We created a single catalogue for the default language and country and then added information about the language and country to it using datasheets. We used this directory to create dynamic ads for each market. The following infographics show the markets where we were active in both channels: Facebook and Google Ads. 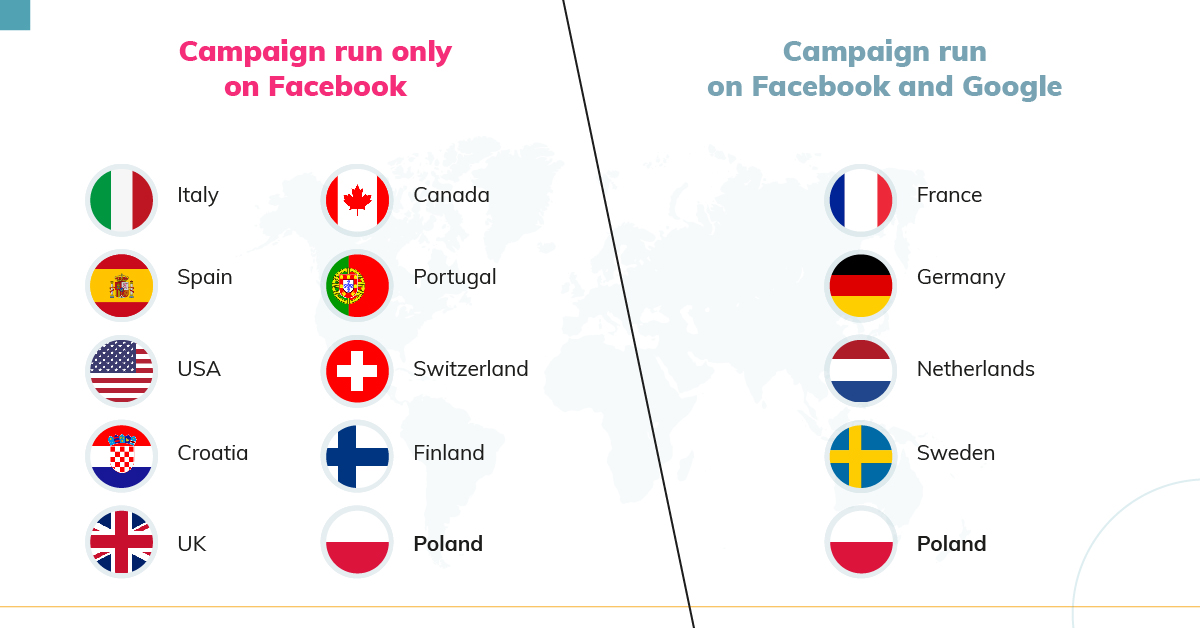 Our campaign has grown to more markets in Europe and across the Atlantic.

To test ads and creations, we used every ad possible on Facebook: Collection Ads, Single Image Ads, Carousel Ads, Video Ads. At each stage, we analyzed their effectiveness in particular countries. The offer of the marketplace was non-stop changing, and the Pixers team introduced promotions periodically. We decided to create an advertising schedule using automatic rules on Facebook, which allowed us to control the content of ads displayed on any particular day. 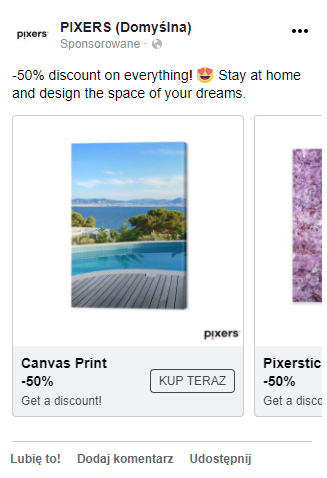 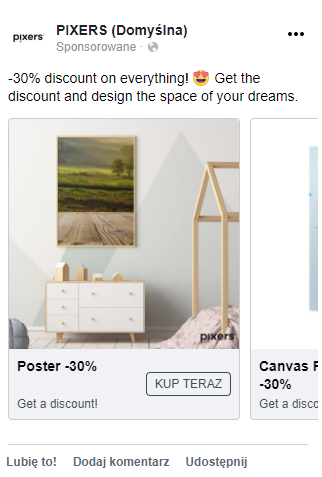 5. Step: Script for the automatic exclusion of ineffective phrases.

Patterns offered by Pixers often refer to popular keywords – they come in many configurations (e.g. on murals, pillows and paintings). We noticed that many of the searched phrases were too general and ambiguous, which resulted in the campaign not reaching its full potential. To maximize sales, we created a script in cooperation with the client. It analyzed the searched phrases and ruled out words that did not contain different configurations of the product stated in the feed. With this approach, we were able to control what keywords we used in our ads and to separate the different categories in the product feed and as a result, they did not compete against each other. At the same time, the user could see exactly the product he was looking for earlier and could buy it. 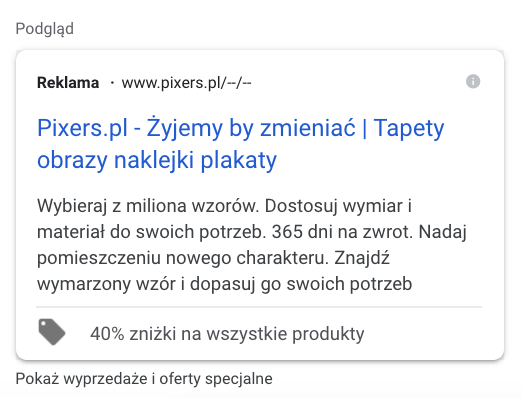 Text ads with the extension of the promotion displayed on the days based on the schedule adjusted to the current promos in the store. 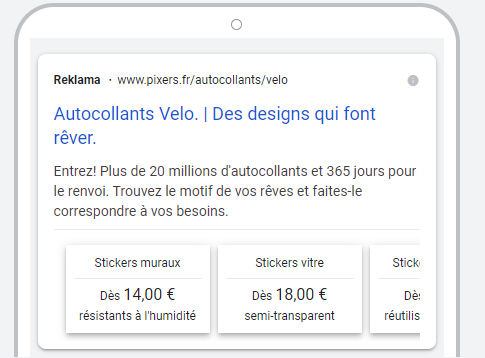 When this case study was created, the text campaign on the search network had already lasted 3 months and was conducted in 3 markets. It contained over 31,000 keywords in 15,676 ad groups and 93,554 ads.

Effects and summary of cooperation

We have achieved all of our goals: we have reached the right target groups, increased brand awareness and direct sales from the store.

We have significantly increased the scale of revenues while maintaining or even increasing the return on advertising.

In e-commerce, which has hundreds of thousands of products in 9 months, we increased the conversion value by 516% while increasing ROAS by 39%. With such a significant increase in conversion value, campaigns often see a decrease in ROAS, so even a small increase in this parameter is a success.

That’s how the increase in conversion value has been shaping

Increase in the number of users visiting the Pixers website.

The scale of paid activities increased within nine months & traffic from the channels where we conducted campaigns rose almost 20 times. We showcase the increase during this time in the chart below: 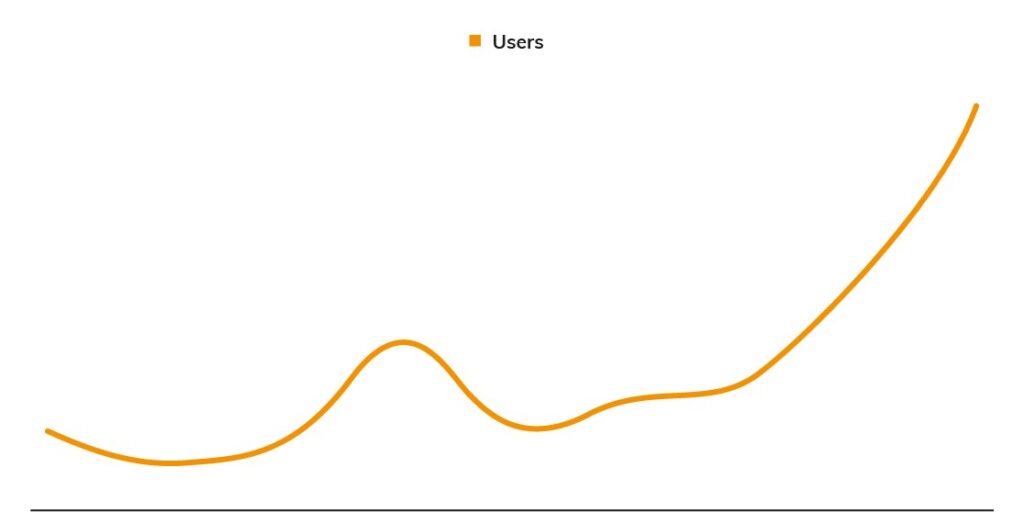 Increase in the number of users

Thanks to Google analysis, we concluded that the target client at Pixers are women, which allowed us to shape the campaign plan. We can see the percentage share in terms of gender in the chart below: 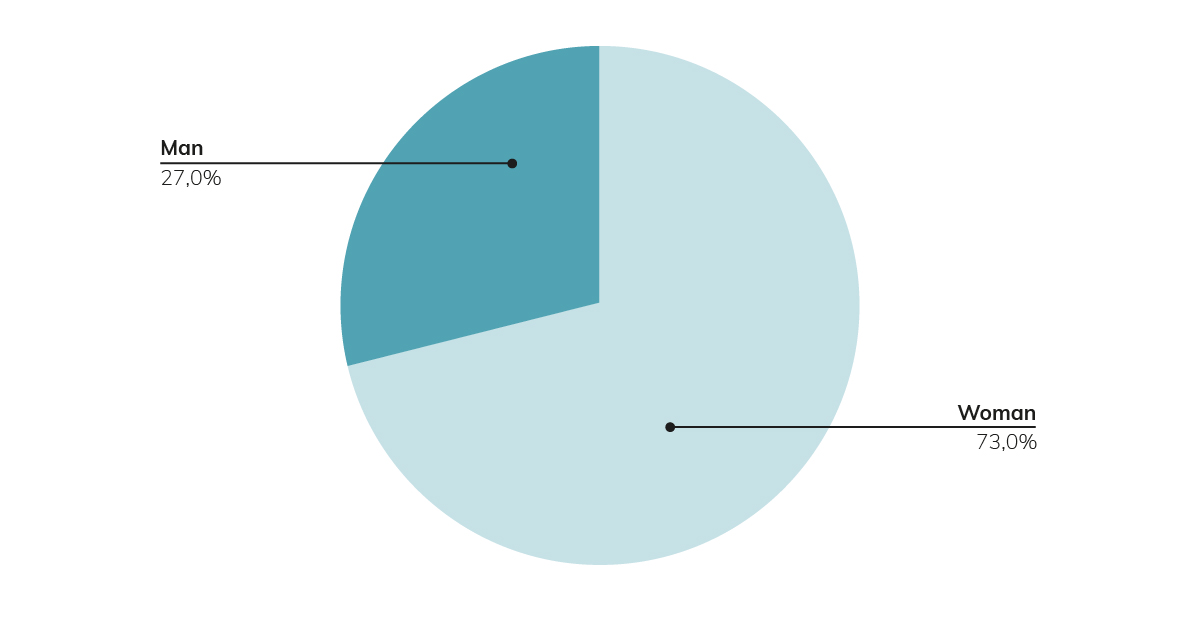 The effects of our cooperation in numbers: 14 markets, an increase in conversion value by 516%, with an increase in ROAS by 39% and a 20-fold increase in Pixers marketplace users. All this was possible thanks to the team’s partnership approach and original, effective solutions.

Pixers prepared interesting creations and footage, which we could implement in the campaign. The company also provided translations of advertising texts into all nine languages. Pixers also gave us a free hand for testing, suggesting alternative solutions and campaign optimization.

Our cooperation with Whites was as if the activities were carried out not by an external agency, but by a partner team of specialists. We had frequent, cyclical statuses and we defined KPIs together. The Whites team proposed and implemented automation of activities, developed campaigns dynamically, conducted many tests. Our partners completed all tasks in a 3-person team and reacted to our needs and suggestions actively!

Whites efficiently implemented innovative, complex and experimental campaigns in non-standard channels, using its scripts. The agency also performed optimizations and tests, which led to not only increased sales but also increased value of a single basket and reduced unit costs. It is worth mentioning that in the era when consumers increasingly use the Internet on mobile devices, the effectiveness of campaigns and conversion value increased the share of desktop traffic because of optimization. 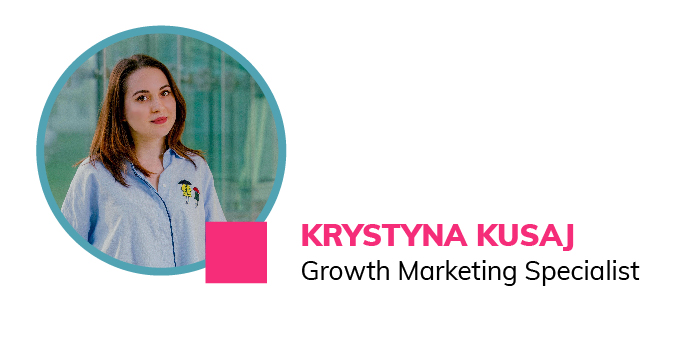 The campaign for Pixers was an enormous challenge for me, but also a fantastic adventure. We learned many new things and created new tools. We have also already had additional ideas for further actions, including the expansion of the campaign to other countries. I’m glad that the relations between the teams during the whole of our cooperation were very partnership-like: we had frequent statuses, we worked out plans for communication and graphic materials together, defined KPI-e and exchanged knowledge. We have been working together very well.

During the nine months of our activities, we worked very hard to increase revenues in the campaign while maintaining the appropriate ROAS level. We have implemented our data-driven solutions and solutions automating campaign communication. We are thankful for Pixers for their trust and for giving us the green light for such actions. We believe that cooperation with Pixers is the beginning of a long business relationship that will serve both parties.

For the Google Ads campaign for Pixers, we won on September 25th this year. The 3rd place in the semKRK awards competition for the best case studies from campaigns conducted by Polish agencies or on the Polish market – the only SEM industry award in Poland.

Previous Whites Agency recognized as the Top B2B Company in the UK for 2021 by Clutch Next Investing In SEO and Content — How Masterclass.com Achieved Unicorn Status